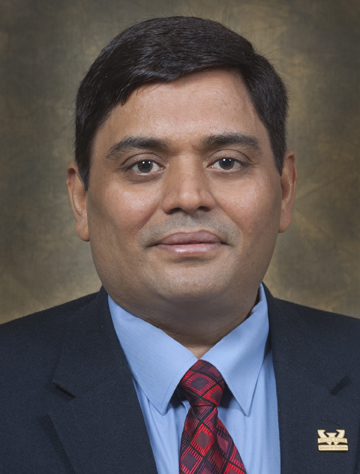 The research interests of laboratory are to study host-pathogen interactions in microbial infection caused by bacteria, viruses, and fungi. Specifically, our focus has been on developing immunomodulation strategies targeting Toll-like receptor (TLR) signaling in preventing and/or treating infectious diseases affecting the eye (e.g. keratitis and endophthalmitis) and other organs. We use cutting-edge and high throughput “omics” technologies such as transcriptomics, lipidomics, and metabolomics combined with systems biology to study host immune responses to infection. Another area of our research is to understand mechanisms of antibiotic resistance among bacteria, prevalent in hospitals and the environment and develop alternative antimicrobial therapeutics to reduce antibiotic resistance.

Mechanisms regulating retinal innate immunity: The long-term goal of this project is to investigate mechanisms regulating immune responses in infectious endophthalmitis and to develop new therapeutic strategies. We are specifically interested in receptors involved in innate immunity, such as Toll-like receptors (TLRs) and Nod-like receptors (NLRs – including Nlrp3), and also signals activated. The specific role played by retinal residential (glial cells) and infiltrated (neutrophil and macrophages) cells this disease is also being investigated. Our studies demonstrated that, in addition to the inflammatory response, the activated glial cells exert antibacterial responses, including the production of antimicrobial peptides and bacterial phagocytosis, a phenomenon exhibited by classical immune cells such as neutrophils. Moreover, we showed that pretreatment with a Toll-like receptor 2(TLR2), ligand protected mice from bacterial (S. aureus) endophthalmitis.

In addition to bacteria, we also study pathogenesis of fungal infections in causing ocular infections. We recently developed, two mouse models one for Candida albicans and another Aspergillus fumigatus. In comparison to other infections, the prognosis of fungal endophthalmitis is poor due to frequent delay in diagnosis, reduced availability of therapeutic choices, and the immunocompromised status of the host. The long-term goal of this proposal is to identify genomic or metabolic alterations, which could serve as putative biomarkers for diagnosis, diseases progression, and/or therapeutic response in fungal infections and can be easily monitored in patients’ bio-fluids (aqueous, vitreous, blood, or urine).

Metabolic regulation of immune responses: Immunometabolism is an emerging area of investigation bridging distinct disciplines of microbiology, immunology, and biochemistry. It is well-established that both innate and adaptive immune cells are highly dynamic for their ability to rapidly transition from resting/patrolling to activated states in response to injury or infectious stimuli. Recent studies have revealed an important role of metabolic reprogramming, including dynamic regulation of aerobic glycolysis (the Warburg's effect), lipid synthesis and degradation, and mitochondrial activity, and the outcome of immune responses. The goal of this project is to investigate the molecular underpinnings of immunological/metabolic cross-talk in shaping immunity and to provide metabolic check points to modulate immune responses. Specifically, we are interested in elucidating the role of adenosine monophosphate (AMP)-activated protein kinase (AMPK), a master regulator of cellular metabolism.

Additionally, we are also investigating the role of specialized pro-resolving mediators (SPMs) in promoting inflammation resolution in bacterial infection. SPMs comprise omega-3 polyunsaturated fatty acid (PUFA) derived metabolites such as resolvins and protectins. Our studies revealed increased generation of both docosahexaenoic acid (DHA)-derived SPMs (RvD1, RvD5, and PD1) and their precursors (17- and 7-HDoHEs) in bacterial infection. Currently, we are investigating the interplay between inflammatory pathways activated in response to pathogen challenge and pro-resolving pathways that promotes resolution of inflammation in restoring tissue homeostasis.

Novel therapies to combat antibiotic resistance: Our research efforts in this project are geared towards understanding the mechanisms of antibiotics resistance among pathogens such as S. aureus, S. epidermidis, and A. baumannii and towards developing new and effective antimicrobials to combat these MDR bacterial strains. In our recent study (Antimicrobial Agents and Chemotherapy, 2014), we reported, for the first time, the potential use of bacteriophage endolysins to treat staphylococcal endophthalmitis in a mouse model. This project was funded by Research to Prevent Blindness (RPB) special scholar award. Currently, we are predicting and testing FDA-approved drugs for repurposing to combat antibiotic resistance.

Pathogenesis of emerging viral (Zika virus) infection: The emergence of Zika Virus (ZIKV) in both endemic and non-endemic regions around the world has been accompanied by an unprecedented expansion in the spectrum of ZIKV-associated disease pathologies. While the pathogenesis of ZIKV infection are not fully understood, we recently reported that ZIKV caused retinal lesions in mouse eyes, with the clinical presentation (i.e., chorioretinal atrophy with retinal pigment mottling) resembling features of ZIKV-associated ocular pathology in infants. Moreover, cells lining the blood-retinal barrier (BRB), including endothelial cells, were found permissive to ZIKV replication. As it is becoming increasingly clear that ZIKV infection has implications beyond microcephaly, as infants born with congenital ZIKV have pathology in their eyes, ears, limbs, and perhaps other organs. Currently, we have made multidisciplinary research teams investigating the effect of ZIKV in pregnancy, hearing disorders, neurological, and developmental problems. Given the rapid spread of ZIKV and the lack of specific treatment or vaccine, the overall goal of this project is to identify new therapeutic strategies to prevent ZIKV-associated birth defects in newborns.