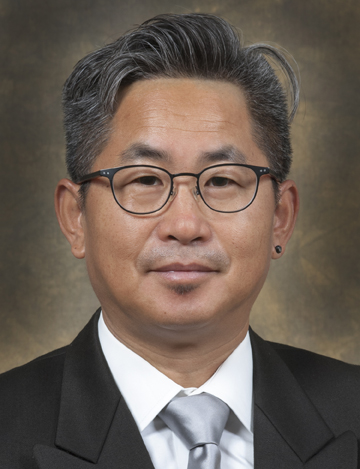 The research interest of my lab is to study the roles of microRNAs (miRNAs) in the eye and ocular diseases. miRNAs are small, non-coding, regulatory RNAs and constitute a newly recognized level of gene expression regulation. Our long-term goal is to uncover the roles miRNAs in normal development and function of the eye, as well as in ocular diseases so as to identify novel miRNA-based therapeutic targets for the treatment of various ocular diseases.

In addition, we discovered that the miR-183/96/182 cluster is also expressed in the cornea, and in the innate immune cells, including neutrophils and macrophages; inactivation of the cluster in mice results in a decreased inflammatory response and reduced severity of Pseudomonas aeruginosa-induced keratitis, providing the first evidence that the miR-183/96/182 cluster plays an important role in innate immune functions and the corneal response to P. aeruginosa infection (IOVS, 2016). Furthermore, with our collaborators, we discovered that that miR-183/96/182 cluster is expressed in Th17 and iNKT cells and promotes Th17 pathogenicity (Immunity, 2016) and plays important roles in iNKT cell development, maturation and effector functions (J Immunol, 2019).

On another line of research, we reported the first systemic studies on miRNAs in diabetic retinopathy (DR) and identified a series of miRNAs involved in early DR (IOVS. 2011). This report is recognized to “provide the first insight into the roles of miRNAs in the pathogenesis of DR” by peers in the field. We further showed that miR-146 has a negative feedback regulation on the interleukin 1 receptor (IL-1R)/Toll-like receptor (TLR)-mediated as well as G-protein-coupled receptor (GPCR)-mediated NF-kB activation pathways in RECs through targeting key adaptor molecules of these pathways (IOVS. 2014). Recently our in vivo study in a diabetic rat model showed that intraocular delivery of miR-146 suppressed NF-kB activation pathways, inhibited diabetes-induced upregulation of pro-inflammatory factor and retinal microvascular and neuronal functional defects (IOVS 2017), providing a proof-of-principle evidence that miR-146 is a potential therapeutic target for treatment of DR.

1) The potential and mechanisms of the miR-183/96/182 cluster as a therapeutic target for treatment of P. aeruginosa-induced keratitis: P. aeruginosa-induced keratitis is one of the most rapidly developing and destructive diseases of the cornea and a global cause of visual impairment and blindness. P. aeruginosa is one of the most common causative organisms of contact lens-related disease in developed countries. Although antibiotic treatment reduces the bacterial burden, tissue damage often occurs as a result of a poorly controlled host immune response. Previously we showed that inactivation of the cluster results in a decreased inflammatory response and reduced severity of P. aeruginosa-induced keratitis. We hypothesize that downregulation of the miR-183/96/182 cluster in the cornea by anti-miR-183/96/182 has a therapeutic effect on P. aeruginosa keratitis. We are currently testing this hypothesis and study the mechanism underlying the therapeutic effect. Possible mechanisms include enhancement of innate immunity and neuroimmune interactions.

4) Identification of disease-causing mutations in the miR-183/96/182 cluster in human. Previously, we have shown that inactivation of miR-183/96/182 cluster in mice results in multi-sensory defects, including retinal degeneration and blindness, deafness and balancing deficit, as well as changes in both the innate and adaptive immunity. We hypothesize that mutations in human cause syndromic retinal degeneration with involvement of multisensory domains and immune and autoimmune complications. We have established a collaboration with EyeGene – a NEI, NIH-operated tissue depository for patients with inherited retinal dystrophies. We are currently performing mutation screening in these patients. We are seeking to expand the collaborations of physician scientists in different fields, e.g., ophthalmology and immune/autoimmune diseases, to identify human disease(s) caused by mutations in the miR-183/96/182 cluster. If successful, we will identify the molecular basis for these diseases and develop new gene diagnosis and therapy.